The third generation of climate indexes

According to science,1 investors need to address climate change to position their portfolios for the future. While exclusion of the highest carbon emitters is only a part of the story, it does not solve the issue; investors must also assess the ability and the commitment of companies to transition to a low carbon economy. Enter the third generation of climate indexes, an approach that positions for transition to a low-carbon economy, not just by penalizing the laggards of today (that is, companies with high carbon risks), but rewarding the winners of tomorrow (that is, companies producing “green” revenues) and the many companies that are “in-between” (demonstrating that they have the potential to transition).

As solution providers continue to find innovative ways to respond to climate change, we take a look at the climate indexes released in recent years, the new regulations supporting this third generation and where they might go from here.

The evolution of climate indexation

Second generation indexes took this one step further to capture climate opportunities by rewarding companies with exposure to green revenues. This has become much more feasible to achieve, with approximately 6% of the global listed equity market coming from the green economy in 2018, representing opportunities of almost $4 trillion.2 On this current trajectory, green revenues could represent 7% of global market capitalization by 2030, and potentially up to 10%, if green investments were to accelerate to approximately $90 trillion, which is the estimated amount required to address climate change, according to the New Climate Economy.3

Figure 1. Growth of the green economy – percentage of market capitalization

The third generation of climate indexes identify companies that are transitioning to a low-carbon economy (that is, those that are in-between). Using qualitative and quantitative measures, these equity indexes aim to capture the commitments that companies are making to be more aligned to a low-carbon economy, through policies, corporate strategy, and implementation. Capturing this transition is achieved by tilting the index away from environmentally costly businesses – those who don’t have a climate action plan – and towards climate opportunities and climate leaders in each sector.

Figure 2. The evolution of climate indexes

Third generation climate transition indexes are a powerful innovation with emphasis on the future, aligning with commitments companies have made to a low carbon or ideally a “net-zero emissions” economy. The rationale behind the approach is that all major sectors have a role to play in the transition, including fossil fuel companies, and that a blanket exclusion of only a small cohort of companies is not optimal. These indexes target companies in each sector that represent the highest emissions. This makes sense given that the majority of the world’s carbon emissions come from a relatively small number of companies. These companies hold the key to a successful transition to a lower carbon economy and, as such, targeted action can be highly impactful. As an example, the Climate Action 100+ initiative targets only 161 companies, but these companies cumulatively represent over $8.1 trillion in market cap, and account for up to 80% of global industrial emissions.4

Moreover, the influence of engaged institutional investors, in encouraging companies to align their business strategies to a lower carbon economy, is on the rise. For example, we’ve seen this rise in investor action in the form of shareholder resolutions, ranging from disclosure-related requests to requests to develop climate strategies to align to a low carbon economy.5 There have been several success stories that highlight the benefits of this engagement, and analysis highlighting the “potential of [shareholder] resolutions to turn words into actions".6 For example, through engagement with the Climate Action 100+, investors have achieved emissions reductions commitments from several companies including Royal Dutch Shell, Glencore, Xcel Energy, Maersk, BHP Billiton, Daimler, Duke Energy, Heidelberg Cement, Nestle, and Volkswagen.7

Index providers have been active in developing and launching climate transition indexes, either using their own ESG data, and/or working with external ESG data providers, so the opportunity set is increasing in equities and fixed income. We have seen several new climate-transition index launches over the past year, although implementation by asset managers is slower. Asset managers who are developing equity and fixed income indexes using their own intellectual capital (that is, self-indexation) are another option.

A key differentiator amongst index offerings is the emphasis on climate stewardship and knowing what issues to engage on. In our view it is important that there is transparency between engagements (successful or unsuccessful) and changes in company scores. Not many indexes provide this level of transparency currently.8

We have generally found asset managers who are self-indexing to be relatively more transparent. There tends to be better alignment with sustainable investment philosophies, and they typically demonstrate stronger stewardship, as there are clearer links to voting policies, engagement agendas and changes in company scores. To the extent that this level of transparency in stewardship applies to climate-oriented fixed income indexes is an area of our ongoing research.

We have seen some regulatory divergence around the world, but one of the most significant initiatives on sustainable finance has come from the European Union. The European regulator has introduced minimum standards to help index providers who are designing new climate-related benchmarks. These third generation climate benchmarks aim to:

There are two different “labels” for the different climate benchmarks – “Climate Transition Benchmarks” and “Paris-aligned Benchmarks”. These labels aim to provide a degree of consistency amongst the variations of climate indexes. Figure 3 compares the European framework to the existing climate and low carbon indexes. 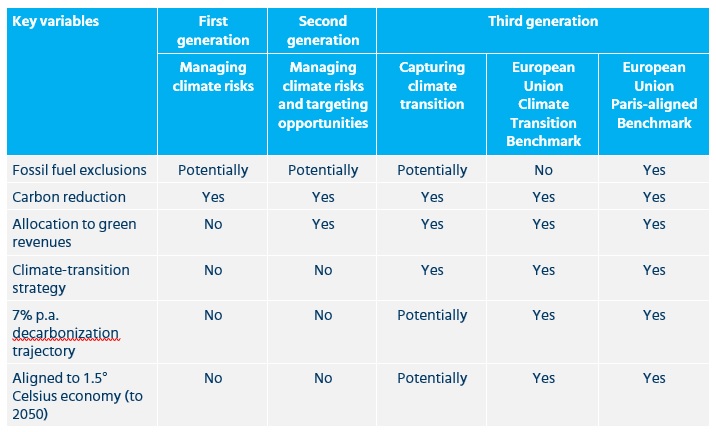 Where to from here?

Index providers and asset managers alike are all racing to develop climate-transition indexes, with many aligning themselves to the new EU regulations.

We have worked with several clients, large and small, to implement their climate strategies over the years, taking a low carbon investment approach for both active and passive strategies. We recommend that investors should be taking a total portfolio approach to implement a climate strategy. Specifically, investors wishing to position for a transition to a lower carbon economy should have three objectives:

Mercer has developed a “transition rankings spectrum” to assess climate-transition risks and opportunities at a total portfolio level, with the objective of identifying companies that are grey, green and in-between. The exhibit below shows how this links with the evolution of the three generations of climate indexes.

This new, third generation of climate transition indexes may, for the first time, offer asset owners working within an index framework a way to achieve all three objectives.

1Please see Mercer’s 2019 Investing in a Time of Climate Change - The Sequel for further details on the scientific consensus of the impacts of climate change.

3New Climate Economy, “2018 Report of the Global Commission on the Economy and Climate”, 2018

8Please see our prior paper “A Guide to Responsible Investment Indices” published in March 2019 for more detail. https://www.mercer.com/content/dam/mercer/attachments/private/nurture-cycle/gl-2019-wealth-guide-to-responsible-investment-indices-mercer.pdf

I would like to speak to a Mercer consultant.