Investments From grey to green

Your path to portfolio transition

Institutional investors such as pension funds, financial institutions, insurers, wealth managers, endowments and foundations, hold trillions of dollars in assets1 in their portfolios that are highly exposed to climate transition risk in a decarbonizing economy. If investors do nothing to address this issue today, climate change could reduce their ability to deliver on investment promises such as pension payments. We believe that now is the time for investors to reposition portfolios for the transition to a zero-emission economy. Mercer’s analytics help investors assess their investments by categorizing the portfolio on a spectrum — going from “grey” or high-carbon, low-transition investments to those that are already low-/zero-carbon or are climate solutions — “green” investments. Many companies lie in the middle, and these also need to be assessed on their capacity for transition in the future. 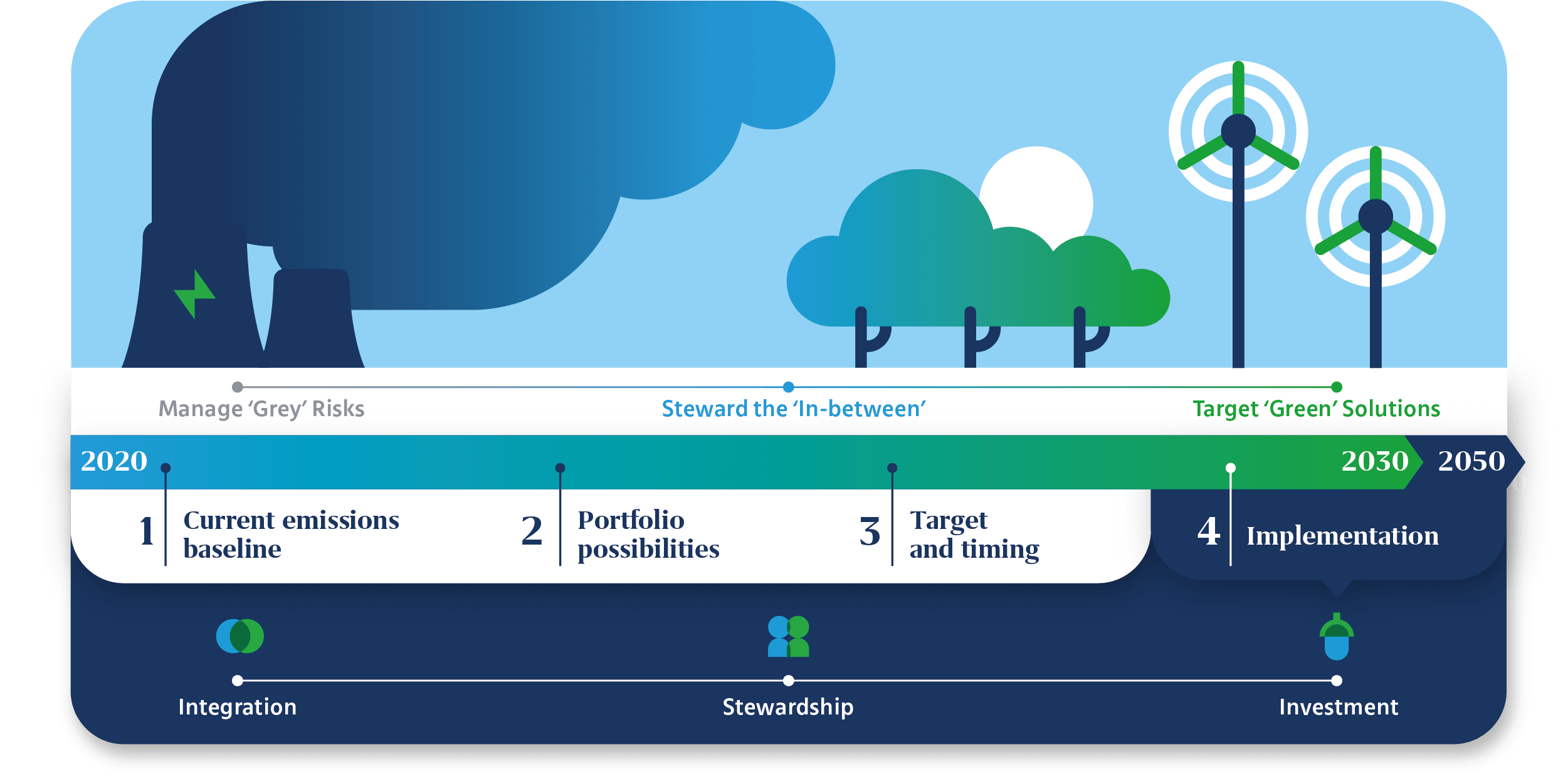 Why we all need a transition plan

The scientific evidence shows the situation is urgent. We’ve already had a 1°C increase in average global temperatures over preindustrial times. According to current science1, we could be facing a 2°C increase in as few as 30 years — a climate humans have never experienced. As a result, investors should educate themselves on the downside risks they face because of the transition — as well as potential opportunities to benefit from it. In particular, many companies, investors and governments have announced alignment with the targets of the 2015 Paris Agreement, including taking measures to prevent temperatures from increasing past the 1.5°C threshold2.

Addressing climate change requires reducing fossil fuel emissions. Studies indicate that the transition to a low carbon economy is already underway3. Consider how technology has driven down the cost of renewables. 2019 was the fifth year in a row in which renewable capacity additions, outstripped additions from fossil fuels and nuclear combined, for example, NextEra Energy now has a larger market capitalization than ExxonMobil.

As investors, we need to try to assess companies’ ability or willingness to transition toward limiting global temperature increases and how well-positioned they are for the low-carbon economy. To make a proper assessment, we need to get serious about the risks. One of the key findings of our Investing in a Time of Climate Change — The Sequel report was that investors should position for a below 2°C scenario, which we believe will offer improved investor outcomes.

Setting your transition pathway — doing your bit, your way

Regardless of your size or where you are on your climate change journey, your exposure to the climate transition is likely to impact your portfolio. We work with clients of all shapes and sizes, helping them assess portfolio opportunities, establish targets and produce implementation plans that can be integrated with strategy and portfolio construction decisions.

Your total portfolio view will provide baseline results for multiple asset classes. You’ll be able to drill down into manager portfolios that are driving asset-class results. This insight will help you determine where your current carbon emissions are in the portfolio and where you can make reductions. It will also help determine where to focus your efforts with sectors and companies to improve transition capacity and increase your exposure to green solutions.

I would like to speak to a Mercer consultant.