DB pension plans maintained their elevated funded positions during Q2 2021. But for how long?

Canadian defined benefit plans’ funded positions maintained their elevated funded levels during the second quarter of 2021. Maintaining these levels will depend on continued positive equity market performance, inflation and the level of interest rates in a re-opened post-COVID world.

The Mercer Pension Health Index (MPHI), which represents the solvency ratio of a hypothetical defined benefit (DB) pension plan, remained relatively unchanged during the second quarter, coming in at 125 percent at the end of June. The median solvency ratio of the pension plans of Mercer clients was at 100% as of June 30.

Most pension plans experienced positive investment returns in the quarter. However, the effects of the positive investment returns on the funded positions were offset by a decrease in the yields on long term bonds and a change in the guidance on estimating the cost of purchasing annuities (both of which increased plan liabilities), leaving the funded positions relatively unchanged from March 31 levels. The Mercer Pension Health Index remains at its highest levels since its inception in 1999. Approximately half of the pension plans of Mercer clients are estimated to be in a surplus on a solvency basis; and fewer than 6% have solvency ratios below 80%. “2021 continues to be a good year for DB plans,” said Ben Ukonga, Principal in Mercer’s Financial Strategy Group. “The recovery from the lows of March 2020 has been remarkable. But only time will tell whether the improvements will be sustained.”

With the continued increase in the number of vaccinated individuals, an end to lockdowns, the re-opening of the global economy, and the anticipated increases in consumer spending, markets are expected to continue to improve – bringing DB plans along with them. However, major risks still lie ahead, including the risk of emergence of vaccine resistant variants of the COVID-19 virus, vaccination rates falling short of achieving the level for herd immunity (with some economies unable to fully re-open), high valuations in the equity markets (compared to recent history), inflation and the future level of interest rates. Increases in interest rates to combat higher levels of inflation could negatively impact market returns, corporate earnings and the ability of governments, corporations and individuals to service their debts.

Additional risks include geo-political tensions (and the management of these tensions), increasing protectionism, and calls for a slowdown in the rate of globalization and the global supply chain. These trends pose their own unique set of threats to markets, and as a result to DB plans’ funded positions.

“We continue to believe plan sponsors should not be complacent with their pension plans’ improved funded positions. Now is the time for plan sponsors to revisit their risk appetite, align their risk exposure with the risks they are comfortable taking, and where it makes sense, lock in these improved positions and take risk off the table,” said Ukonga.

Well-funded closed and frozen plans have little upside reward for continuing to take on significant risk.  They should use this opportunity to take risk off the table, by increasing their allocations to defensive assets, matching of plan investments to plan liabilities, annuity transactions, wind-ups or even merging into a jointly-sponsored pension plan if possible.

Open plans and plans with longer time horizons face a more difficult challenge. Yields on fixed income investments remain low, so these plans must therefore remain significantly invested in growth assets in order to remain affordable, and cope with the resulting volatility that comes with this. This volatility can be reduced by risk-sharing design features, strategic use of margins, increased allocations to private markets, and broader diversification (and across geographies) in public market investments. 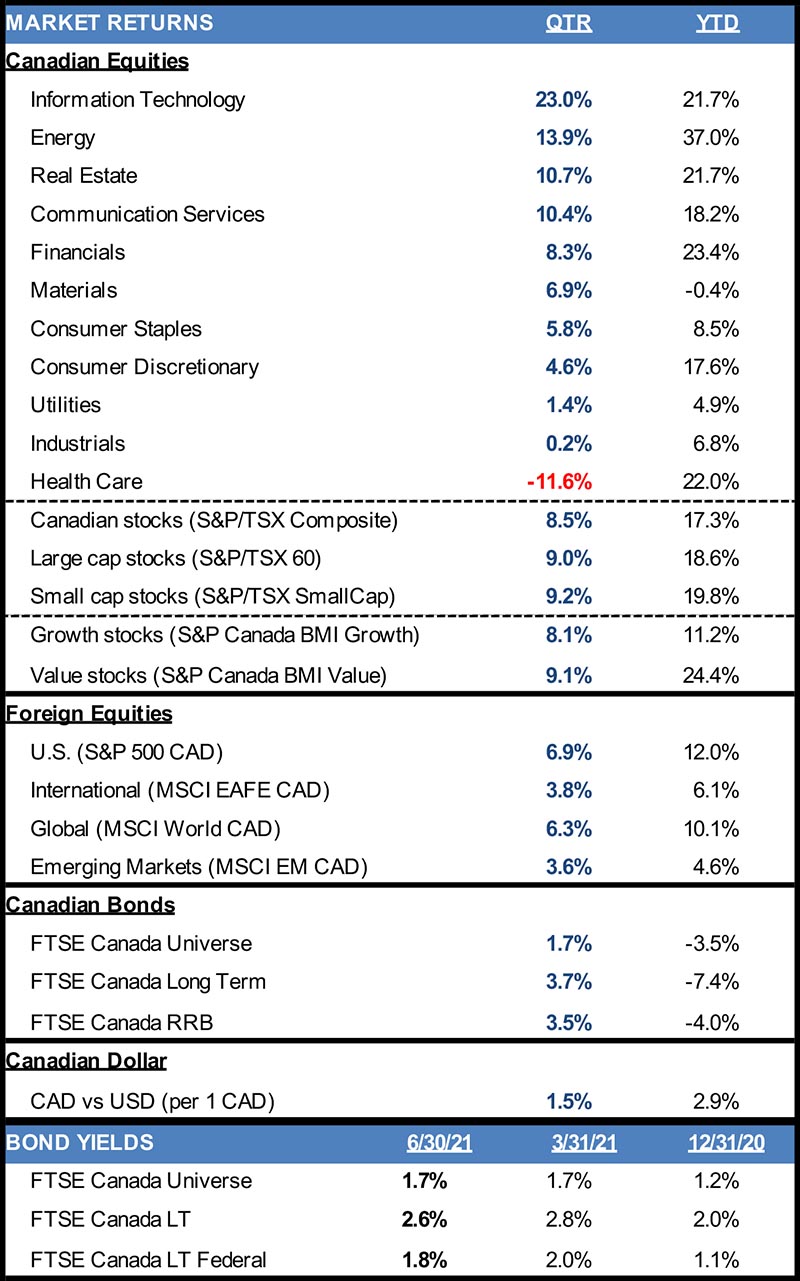 A typical balanced pension portfolio would have posted a return of 5.3 percent during the second quarter of 2021. Many developed economies reopened as the vaccine rollout continued to surprise on the upside, but ‘variant’ scares put into doubt the future of complete re-openings, as well as the revival of international tourism on which many economies rely.

Forward-looking purchasing manager indices suggest that the strong recovery momentum is likely to remain intact as reopened economies will at least benefit from domestic goods consumption and a revival in services, which are struggling to keep up with pent-up demand in some cases. Value sectors outperformed growth sectors once again, as the energy and financials sectors continued to outperform. An inflationary environment should also continue to benefit value stocks in the near future. Canadian equities outperformed their global counterparts, driven by the market’s cyclical makeup and concentration in the energy and financials sectors. The US was in line with global markets while emerging markets lagged, as regulatory pressures on China’s tech sector offset a strong rebound in commodity-exporting countries. Continuing with the trend observed in the fourth quarter of 2020 and first quarter of 2021, returns for Canadian investors were muted. The Canadian dollar appreciated against most major currencies, and the US dollar depreciated as inflationary pressures continued to build over the quarter.

Bond yields remained stable over the quarter in contrast to their sharp movement earlier in the year, as universe bond yields were flat while long-term bond yields fell by 18 basis points. Companies continue to be able to fund themselves at an extremely low cost to strengthen their balance sheets. In combination with the strong economic outlook, this has led to a reduction in perceived credit risk, which investors see as a justification for extremely low credit spreads.

Commodity prices continued to rally as producers struggled to meet ongoing strong cyclical demand, while gold has recovered throughout the second quarter following the correction that occurred earlier in the year. The Canadian real estate market is on pace for a strong rebound in transaction levels this year, driven by strong demand for industrial, multifamily and land assets. Investor sentiment remains mixed in the office and retail space, which has resulted in limited trades in downtown office and enclosed mall assets. However, there should be more clarity on the office sector based on how occupiers behave in the fall.

“While the recovery is in full swing, inflation pressures continue to mount, as the scenario of inflation overshooting official targets during this decade is now more likely than before the pandemic,” said Venelina Arduini, Principal at Mercer Canada. “Investors therefore need to watch for inflationary surprises, which many portfolios may not be well protected against. A sensible option would be a review of the inflation-sensitive portfolio sleeve to ensure the total portfolio will perform well if there is a moderate increase in inflation over the next three to five years.” 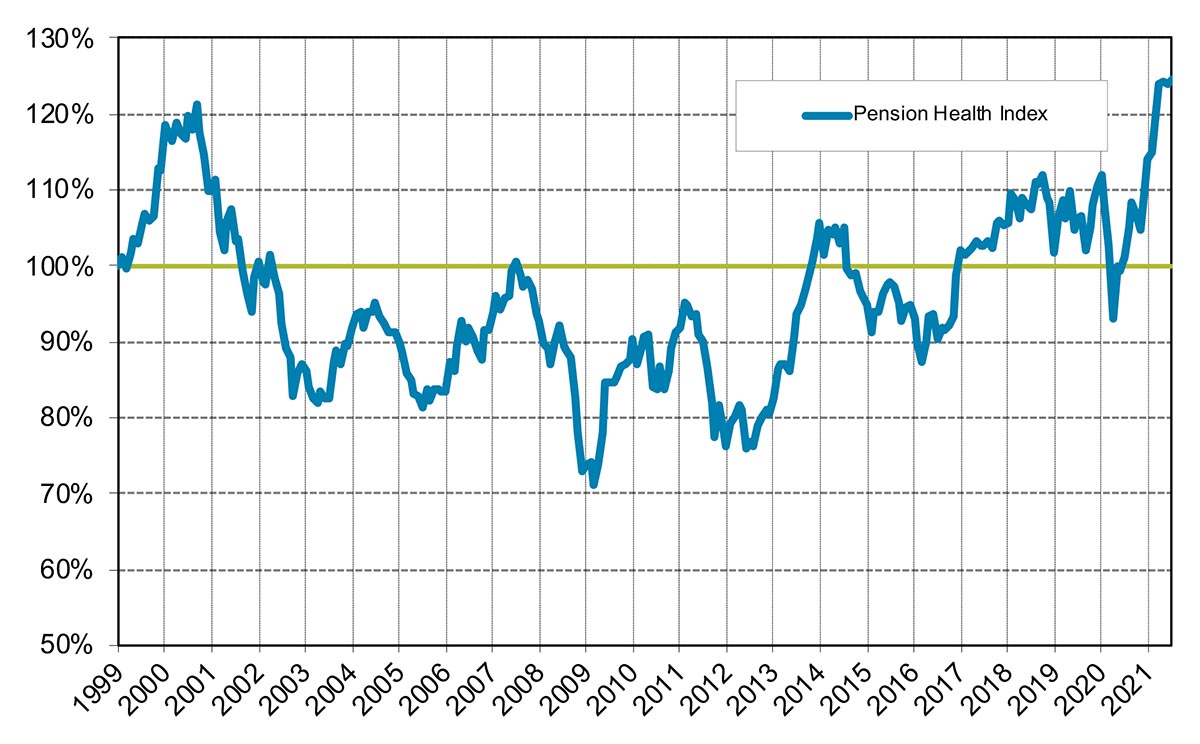