Fueled by a sharp rise in bond yields, Canadian defined benefit pension plans’ funded positions continued to improve, ending the first quarter of 2021 at their highest levels in over 20 years. However, the current high funded positions may be fleeting, depending on the trajectory of interest rates, inflation expectations and the performance of equity markets.

Despite the negative returns experienced by many pension funds in the first quarter, the funded positions of DB plans improved significantly as long bond yields increased a remarkable 77bps during the quarter. While the higher bond yields drove the negative investment returns in the quarter, this was more than offset by the decrease in liabilities resulting from higher discount rates. The Mercer Pension Health Index is at its highest level since its inception in 1999. Approximately 66% of the pension plans of Mercer clients are estimated to be in a surplus on a solvency basis. 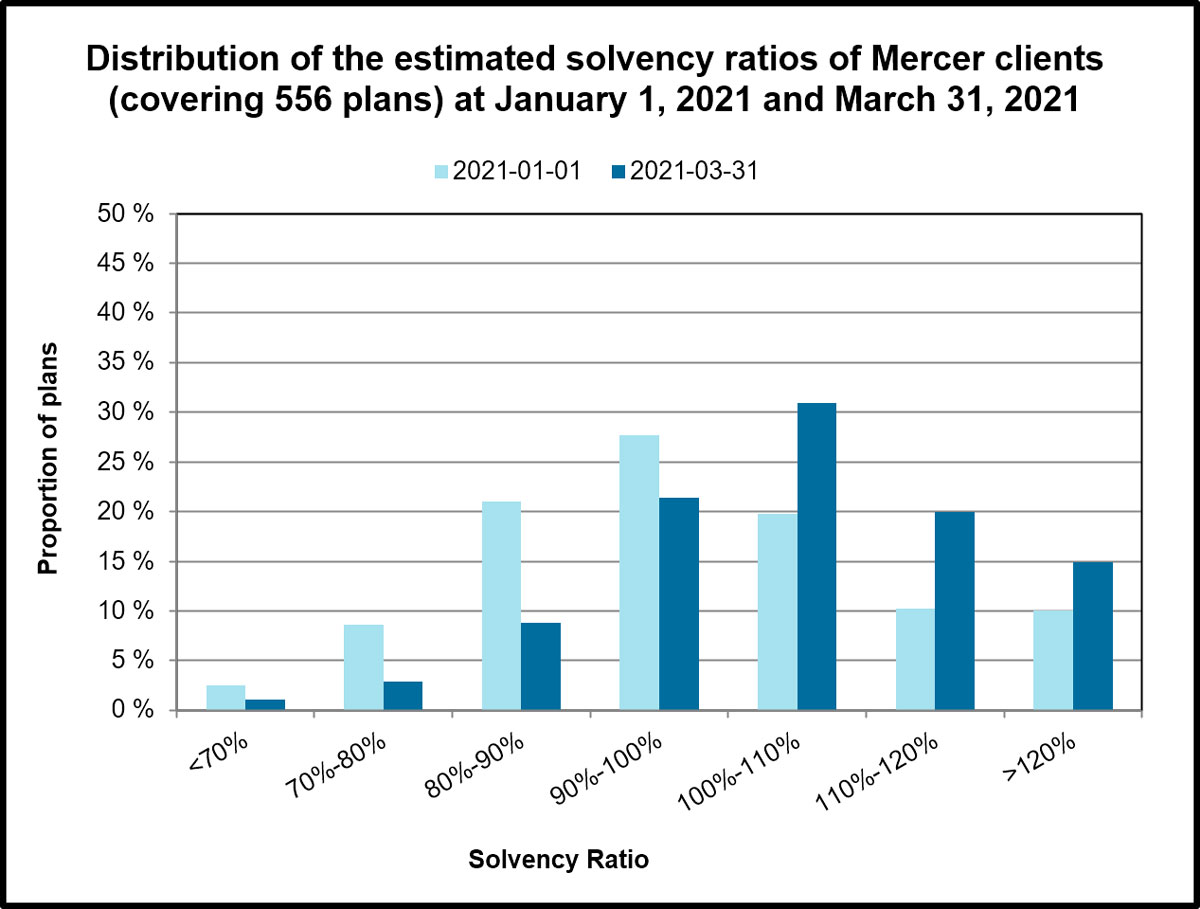 “The first quarter of 2021 has been very good for DB plans,” said Ben Ukonga, Principal in Mercer’s Financial Strategy Group. “In March 2020, as markets were experiencing a gut-wrenching freefall, nobody would believe that pension plans would be breaking funded position records only a year later.”

With the continued rollout of COVID-19 vaccines, re-opening of the global economy, stimulus spending by governments in attempts to re-ignite their respective economies, there is cause for optimism for continued improvements in DB plans’ funded positions for the rest of 2021 and beyond. But risks still exist, such as emergence of new variants of the COVID-19 virus, significant increases in Government debt levels, inflation and interest rate worries, and geo-political tensions.

Increases in inflation expectations and interest rates in particular could negatively affect the economic recovery, corporate earnings, equity market returns, and the ability of Governments, corporations and individuals’ to service their debts.

“Despite the good news, plan sponsors should not be complacent. We all saw how quickly DB plans’ funded positions deteriorated at the outset of the pandemic. The improved positions we now see could be short lived,” said Ukonga. “Now is the time for plan sponsors to revisit their risk preferences (or tolerances) and take appropriate actions.”

Well-funded closed and frozen plans have little upside reward for taking on significant risk, and should consider taking risk off the table, by increasing their allocations to defensive assets, better matching of plan investments to plan liabilities, annuity transactions, wind-ups or even merging into jointly-sponsored pension plans if possible.

Open plans and plans with long time horizons face a more difficult challenge.  Yields on fixed income investments remain low despite the increases in the first quarter.  These plans must therefore remain significantly invested in growth assets in order to remain affordable. However, large allocations to growth assets make them more sensitive to market volatility. The challenge will be to strike the right balance that best meets the objectives of the plan sponsor and plan members. Realistic contribution rates, risk-sharing design features, broad diversification across asset classes and geographies, and selecting the right investment managers will become even more important going forward. A typical balanced pension portfolio would have posted a return of -2.3 percent during the first quarter of 2021. While falling COVID-19 cases and vaccination rollouts across the globe fueled optimism in the equity markets, that same optimism over stronger growth led to a rapid rally in bond yields which translated into negative returns for fixed income assets.

Equity markets ended the quarter with slightly positive returns. While performance earlier in the quarter was driven by optimism over medium term growth and an ongoing recovery in corporate profits, weakness towards the end of the quarter was fueled by rising Treasury yields tempering appetite for the most highly valued areas of the equity market. The most cyclical segments of the market were rewarded, as value continued to outperform growth stocks by a large margin. Canadian equities outperformed their global counterparts, driven mostly by the market’s concentration in the energy and financials sectors, which had double-digit returns. In non-domestic markets, the US outperformed the rest of the world while emerging markets lagged, driven by negative performance in China as onshore markets weakened amid concerns over tighter credit and slowing profit growth. Continuing with the trend seen in the fourth quarter of 2020, returns for Canadian investors were muted in the first quarter of 2021, as the Canadian dollar appreciated against most major currencies.

Bond yields have risen sharply since the beginning of the year, resulting in significantly negative returns for universe and long term bonds. Long term bond yields have risen by 77 basis points since the beginning of the quarter, while universe bond yields have risen by 52 basis points. Investors appear to expect that the economy will recover at a much quicker pace than previously expected, and the combination of these rising long-term yields and continued low policy rates could lead to a continued yield curve steepening, to reflect an improving longer-term economic outlook.

Gold fell sharply over the quarter as interest rates increased and the demand for safe haven assets was weak in a continued risk-on environment. Global REITS were in positive territory, but the sector has been slow to recover from its 2020 decline, as uncertainty over the future of commercial real estate will linger for much longer than in other sectors.

“While the continued optimism in equity markets is encouraging, and an eventual rise in interest rates was to be expected following a period of extraordinary low yields, the pace and size of the recent movements have been more significant than many market watchers had forecasted,” said Todd Nelson, Partner at Mercer Canada. “DB Plan sponsors should take this opportunity to assess the impact of rising yields on both their investment strategy and long-term journey plan.”