Despite the significant volatility and market declines experienced in 2022, the Mercer Pension Health Pulse (MPHP), a measure that tracks the median solvency ratio of the defined benefit (DB) pension plans in Mercer’s pension database, finished the year at 113%, up from 108% at September 30, 2022, and up from 103% at the beginning of 2022.

The improved position was primarily due to the significant increases in interest rates during 2022. The higher interest rates led to lower DB pension liabilities, which more than offset the decline in pension plan assets experienced during the year. 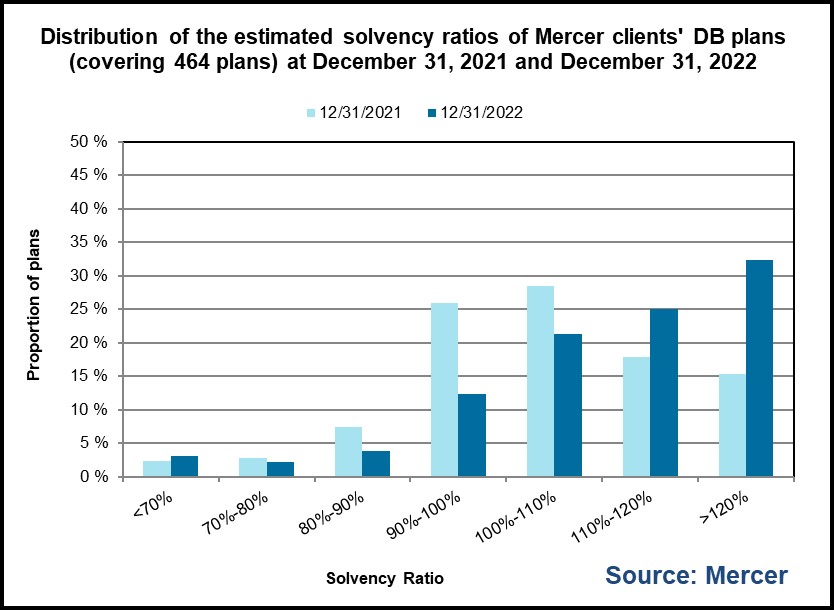 “Despite the asset losses experienced in 2022, as a result of the significant increases in interest rates, the financial positions of most DB plans, when measured on a solvency basis, will be higher at the beginning of 2023 than they were at the beginning of 2022,” said Ben Ukonga, Principal and leader of Mercer’s Wealth business in Calgary. “However, when measured on a going-concern basis, the story may be different. In addition, for plans that use leverage on the fixed income component of their asset mix and also invest in equities, the financial positions of those plans would have likely decreased.”

The question on many market participants’ minds will be what will 2023 bring, given many of the risks and issues that caused the volatility in 2022 have not been resolved?

Will 2023 see a resolution to the war in Ukraine? And what will be the ongoing impact of the war on Europe’s security and energy policies, and how will this extend to the global economy?

Will inflation start to come down, thereby allowing central banks to pause (or reduce) their quantitative and monetary tightening? As a reminder, the Bank of Canada increased its key policy rate 7 times in 2022, from 0.25% at the beginning of the year to 4.25% at the end of the year.

Will the supply chain disruptions, first because of the COVID-19 pandemic, then because of the war in Ukraine and countries and companies’ decisions to re-think their global supply chains to nearer, more friendlier countries, get resolved? And how will the higher interest and inflation rate environments and a possible recession impact governments, corporations and household spending? Will corporations and households curtail spending and investing in anticipation of, and in preparation for, a recession, further exacerbating the risks of a recession?

Irrespective of the answers to the questions above, inflation will continue to pose a risk to employees, employers and plan sponsors in 2023 (and beyond). Employers will need to manage employees’ wage increase expectations against their ability to provide wage increases in line with actual inflation, and must do this in a highly competitive labour market while being faced with higher borrowing costs and a possible recession. To be successful, employers will need a strategy and accurate market data to make informed compensation decisions.

For sponsors of final average earnings and/or indexed pension plans, the impact of the already realized high inflation could be significant. Coupled with the potential for the high level of inflation to continue, even if only for the short to medium term, these plans could have large inflation-related liability risks that may not be immediately apparent to the plan sponsor and other stakeholders.

For sponsors of non-indexed plans, there may be growing calls for ad hoc cost of living adjustments from pensioner groups. Sponsors of flat dollar or career average earnings plans can expect to face pressures to increase the flat dollar accrual rates and to upgrade the earnings base. These calls and pressures can expect to be louder for plans in surplus.

For sponsors with plans now in surplus, we expect conversations will take place on how to manage and utilize the surplus and understand the implications to members and the plan sponsor. Should asset mixes be revisited to increase the allocation to liability-matching assets in order to insulate the surplus and reduce future funded status volatility? And how should the liability-matching asset portfolio be structured? Should margins be increased to provide a stronger buffer for adverse experience in the future and increase benefit security? Other considerations will be benefit improvements (e.g. ad hoc increases to pensions-in-payment, flat benefit or career average upgrades), and contribution holidays (full or partial) for the sponsor and/or members.

For defined contribution (DC) plans, group RRSPs, group TFSAs and other capital accumulation plans, unlike in the most recent few years, 2022 was a year where the majority of plan members experienced negative investment returns in their accounts. For members close to retirement, this may alter their retirement decisions (especially when factoring the recent high inflationary environment), which may affect employers’ workforce management plans. This highlights the importance of having good member investment education and financial wellness programs in place – to assist, educate, guide and provide tools to members as they manage their retirement and other savings, and debts. It also highlights the importance of plan design, fund line-up, record keeper services, and fees, and the need to have these periodically reviewed, and revised as necessary, to ensure the plan is able to meet the goals and objectives of its members and the sponsor. As the investment and capital accumulation plan landscapes evolve, routine reviews of a sponsor’s DC and savings programs is a critical component of any good governance program.

“With continued high inflation, capital market headwinds, and geopolitical tensions, 2023 could turn out just as volatile as 2022,” said Ben Ukonga. “As such, plan sponsors should ensure they understand and are comfortable with the risks their plans are exposed to, and if they are not, should take steps now to manage these risks.” 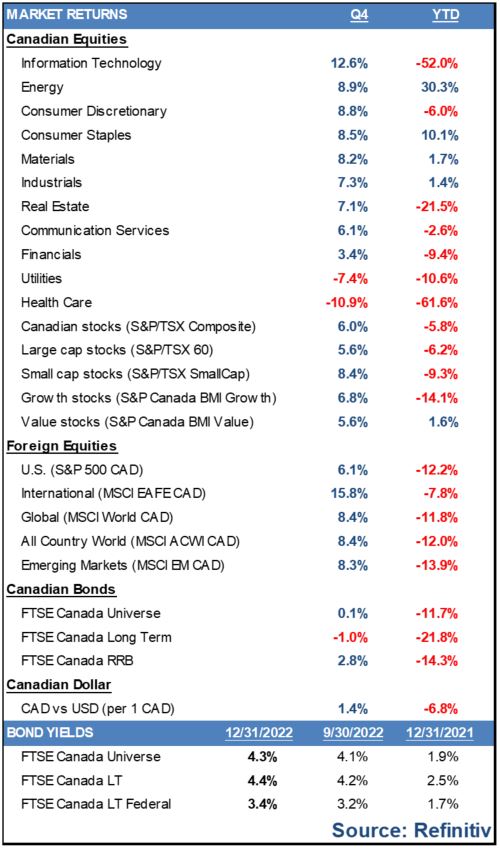 A typical balanced fund portfolio would have posted a return of positive 3.8% over the fourth quarter of 2022. Global equity markets rallied throughout most of the quarter, as investors viewed the increasingly apparent slowdown in global economic growth, better than expected US inflation and softer rhetoric from the Federal Reserve as signs that the monetary tightening cycle may be close to its peak. However, in December, markets were down with growing concerns surrounding possible recession and mixed corporate earnings announcements.

All developed markets ended the quarter with positive returns as equities recovered from their September lows. In November, a better than expected US inflation figure was the catalyst for strong equity returns, as opposed to October when market performance was driven more by earnings resilience than hopes for a monetary reprieve. The equity rally was even more noticeable outside the US, with the MSCI EAFE Index reporting double-digit returns (in CAD terms) driven by the relative depreciation of the Canadian dollar. Bond yields fell during the beginning of the quarter across most major regions as investors priced in a slowing pace of monetary tightening, but ended the year mixed. Emerging markets outperformed Canadian and US equities for the quarter, driven by the reduction and eventual removal of COVID restrictions in China. Commodities were generally mixed over the last quarter of the year, but the index ended the quarter in positive territory driven by energy prices. REITs posted gains, as weakness in residential housing remained an issue due to elevated mortgage rates. From a style perspective, growth outperformed value in Canada but value outperformed growth in other developed markets as value sectors outperformed technology, which continue to experience relative weakness.

Canada underperformed its global peers during the quarter. Unlike other developed markets, information technology was the best performing sector in Canada, while health care and utilities sectors saw declines. In real estate, industrials has been responsible for nearly all capital growth within the index over the quarter and the last 2 years, as the sector’s national vacancy rate remaining at an all-time low below 1.5%. The market environment has led some funds into taking larger than historically normal industrial exposures, with allocations within some funds now ranging from 35% to 50%. The Canadian currency appreciated against the U.S. dollar during the quarter.

“Following the fastest monetary tightening cycle in two decades, inflation can be expected to fall but remain elevated relative to central bank targets over 2023, allowing central banks to pause and then end tightening by mid 2023. Whether central banks go one step further and pivot towards looser monetary policy will be a key driver of market sentiment in 2023.” said Venelina Arduini, Principal at Mercer Canada. “Despite equity valuations improving during 2022, investors should remain vigilant until there is greater certainty that sticky inflation drivers are responding to the new economic environment.” 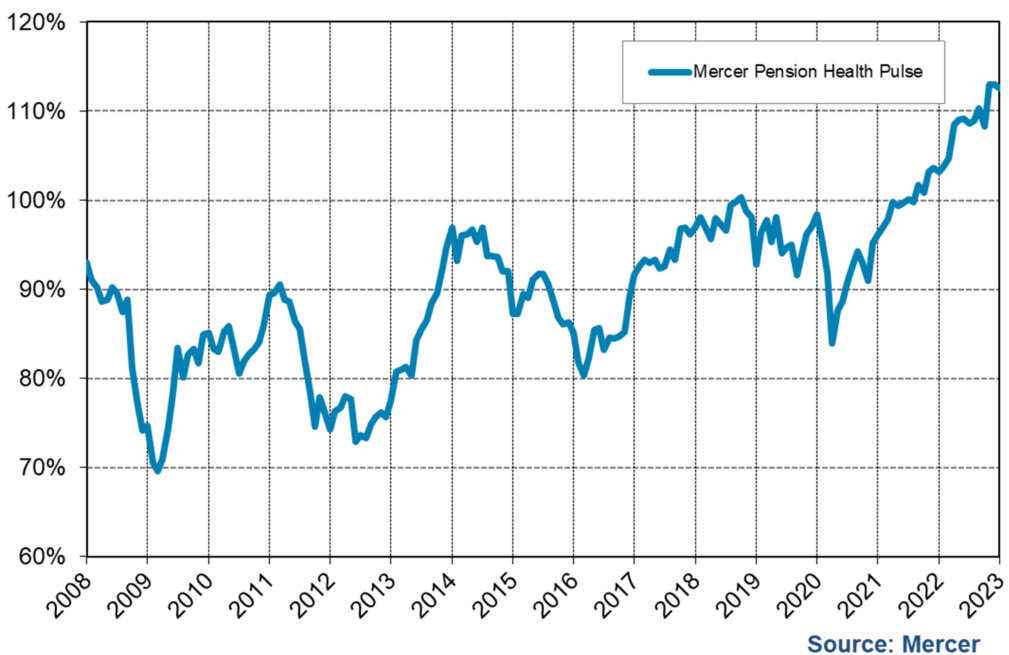 Mercer believes in building brighter futures by redefining the world of work, reshaping retirement and investment outcomes, and unlocking real health and well-being. Mercer’s approximately 25,000 employees are based in 43 countries and the firm operates in 130 countries. Mercer is a business of Marsh McLennan (NYSE: MMC), the world’s leading professional services firm in the areas of risk, strategy and people, with 86,000 colleagues and annual revenue of over $20 billion. Through its market-leading businesses including Marsh, Guy Carpenter and Oliver Wyman, Marsh McLennan helps clients navigate an increasingly dynamic and complex environment. For more information, visit www.mercer.com. Follow Mercer on Twitter @MercerCanada.