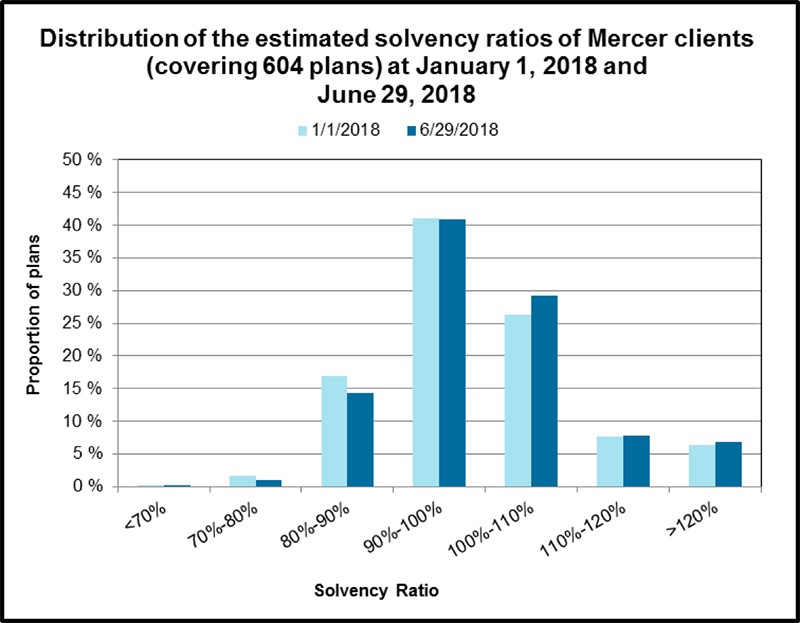 The funded position of pension plans was boosted by strong equity market performance, despite the retreat in the last few weeks of June. Long-term interest rates ended the quarter roughly unchanged from the end of the first quarter.

However, financial markets remain volatile due to geo-political uncertainty, particularly whether the current drift towards protectionist policies will accelerate or recede.

Sponsors of closed and frozen defined benefit plans need to urgently consider whether their current risk profile makes sense given their strong financial position and the risks looming on the horizon. “Many of these plans are far too exposed to investment risk given their strong funded position and shrinking time horizon. The upside benefit of generating further surplus is far outweighed by the downside risk of large deficits re-emerging,” continued Monteiro.

A typical balanced pension portfolio would have increased by 2.5 per cent during the second quarter of 2018. Broad-market Canadian bonds and developed equity markets were generally up over the quarter, while emerging market equities declined. 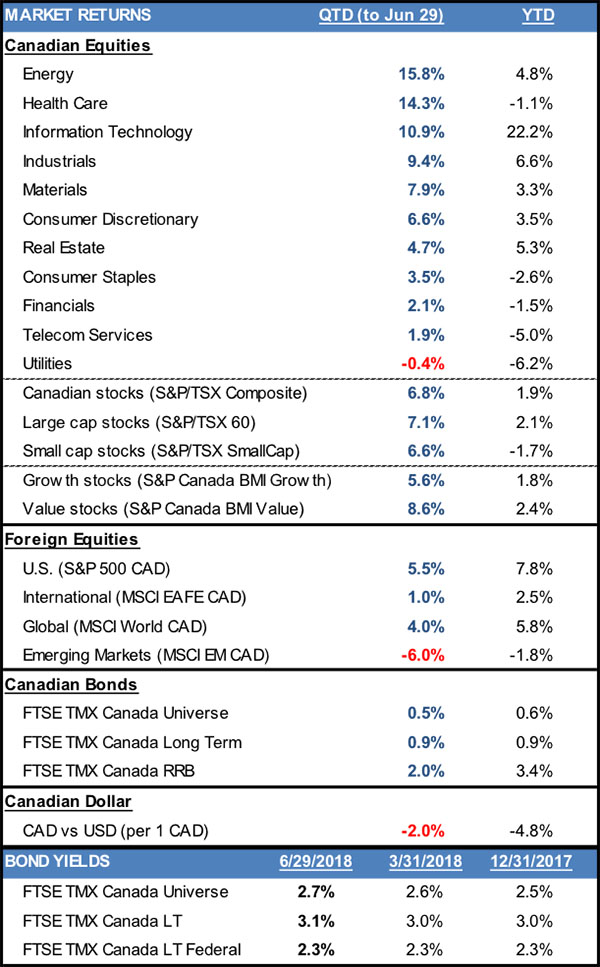 Canadian equities surged over the second quarter, with the S&P/TSX Composite Index returning 6.8 per cent, its largest quarterly gain in over four years. Ten of eleven sectors posted gains in the broad-based rally, which followed a 4.5 per cent decline in the first quarter. Energy (+15.8 per cent) benefited from rising crude oil prices and regulatory approvals expected to relieve transportation bottlenecks. Health Care (+14.3 per cent) and Information Technology (+10.9 per cent) also posted double-digit returns.

Trade tensions continued to escalate, as NAFTA negotiations stalled and President Trump announced tariffs on China and Canada. “The return of volatility to financial markets remains a key theme so far in 2018,” said Todd Nelson, Principal at Mercer Canada. “Equity markets have generally bounced back nicely following the sharp selloff we saw earlier this year, but ongoing geopolitical issues combined with rising trade tensions remain a major concern. Despite the rally we saw during most of the second quarter, the market remains sensitive to these overriding issues.”

U.S. equity returns were positive in USD terms (+3.4 per cent) and even stronger on a CAD basis (+5.5 per cent) due to depreciation of the CAD versus the USD over the quarter. The CAD appreciated against the Euro and GBP, however, leading Canadian dollar investors to underperform local currency returns in international (EAFE) equity markets (+1.0 per cent CAD and +3.8 per cent local currency). In a reversal of recent trends, emerging markets lagged developed markets, declining by 6.0 per cent in CAD (-3.4 per cent in local currency terms) over the second quarter.

The Bank of Canada held its target for the overnight rate at 1.25 per cent over the quarter, while the U.S. Federal Reserve continued on a tightening path, raising its target rate by a quarter percentage point to between 1.75 per cent and 2.00 per cent.