The solvency position of Canadian defined benefit pension plans remains unchanged following the second quarter of 2019. The Mercer Pension Health Index, which represents the solvency ratio of a hypothetical plan, stayed at 106 per cent on June 30th, up from 102 per cent at the beginning of the year and at the same level following the first quarter’s recovery. The median solvency ratio of the pension plans of Mercer clients was at 97 per cent on June 30th, equal to the number on March 31st, and up from 95 per cent at the end of 2018. More than one third of Canadian pension plans are fully funded and only 3 per cent are below 80 per cent funded on a solvency basis. 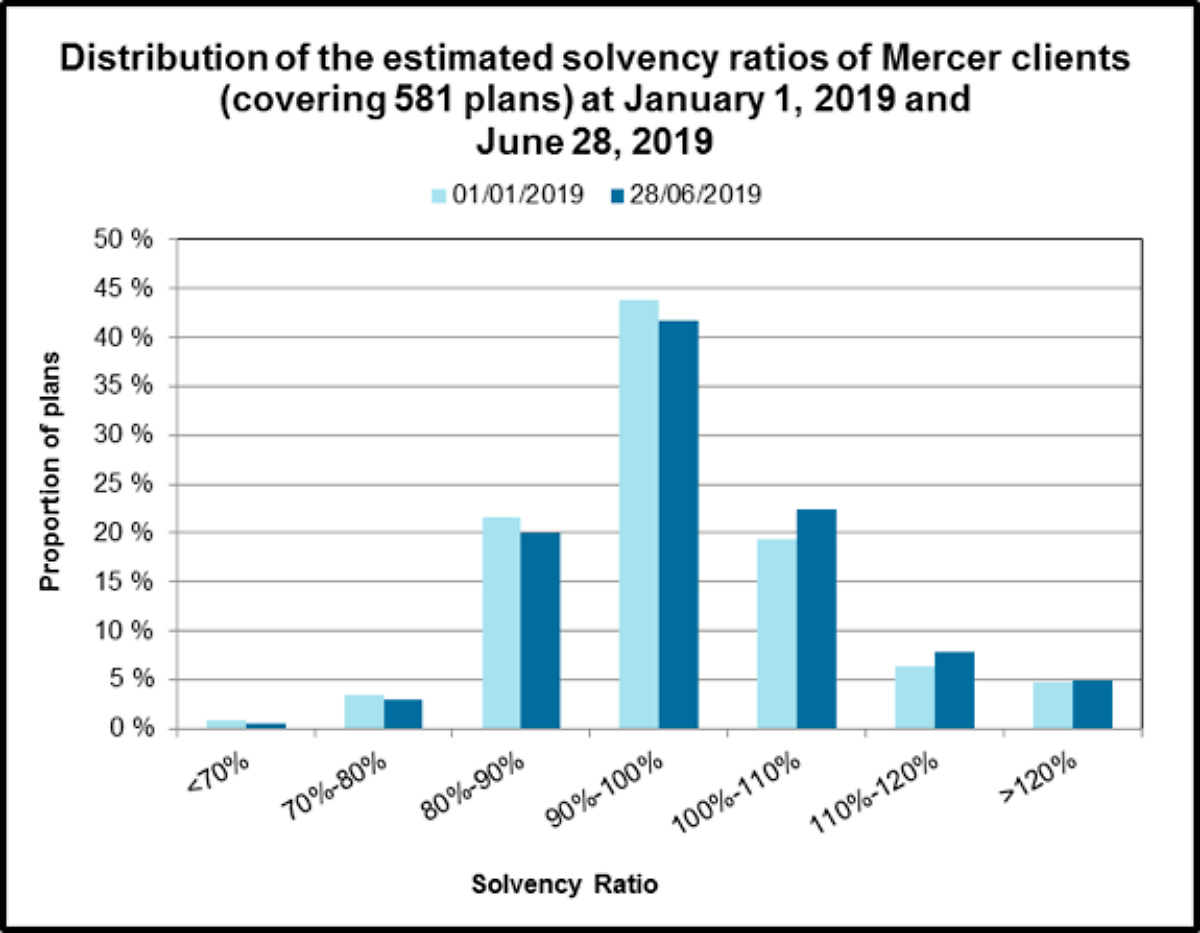 Any hope for relief from a low interest rate environment in the near-term is fading. While funded positions remain at high levels, plan sponsors, especially those of closed and frozen defined benefit plans, should take this opportunity to re-evaluate their de-risking strategies and revisit where they are in their journey plan. “Over the last couple decades, many common factors have led defined benefit plan sponsors to take risk off the table, chief among them the decline in interest rates that directly increased pension obligations,” continued Whale. “Though recent funding legislation in Ontario and Quebec has tackled the other main issue of contribution volatility, plan obligations and the associated risk exposure still remain unsuitably large for many plan sponsors.” A typical balanced pension portfolio would have risen by 3.2 per cent during the second quarter of 2019. Equity markets and Canadian bonds advanced, but at lower levels than the first quarter.

“The pace of global growth is expected to slow this year as unfolding trade tensions between the U.S. and China, as well as the announcement of tariffs on Mexico, weigh on market sentiment,” said Todd Nelson, Partner at Mercer Canada. “Signs of weaker global economic growth further added to volatility in the second quarter.”

Both the Bank of Canada and U.S. Federal Reserve held their targets for the overnight rate at 1.75   and 2.5 per cent, respectively, over the second quarter. ABOUTMERCER
Mercer delivers advice and technology-driven solutions that help organizations meet the health, wealth and career needs of a changing workforce. Mercer’s more than 23,000 employees are based in 44 countries and the firm operates in over 130 countries. Mercer is a wholly owned subsidiary of Marsh & McLennan Companies (NYSE: MMC), the leading global professional services firm in the areas of risk, strategy and people. With 75,000 colleagues and annualized revenue approaching $17 billion through its market-leading companies including Marsh, Guy Carpenter and Oliver Wyman, Marsh & McLennan helps clients navigate an increasingly dynamic and complex environment. For more information, visit www.mercer.ca. Follow Mercer on Twitter @MercerCanada.