The solvency position of Canadian defined benefit pension plans reached their highest level since 2001 during the first quarter of 2018 before retreating in the final weeks of March. The Mercer Pension Health Index, which represents the solvency ratio of a hypothetical plan, stood at 106 per cent on March 30th, unchanged from the beginning of the year. The median solvency ratio of the pension plans of Mercer clients was 98 per cent at March 30th, up from 97 per cent at the end of 2017. 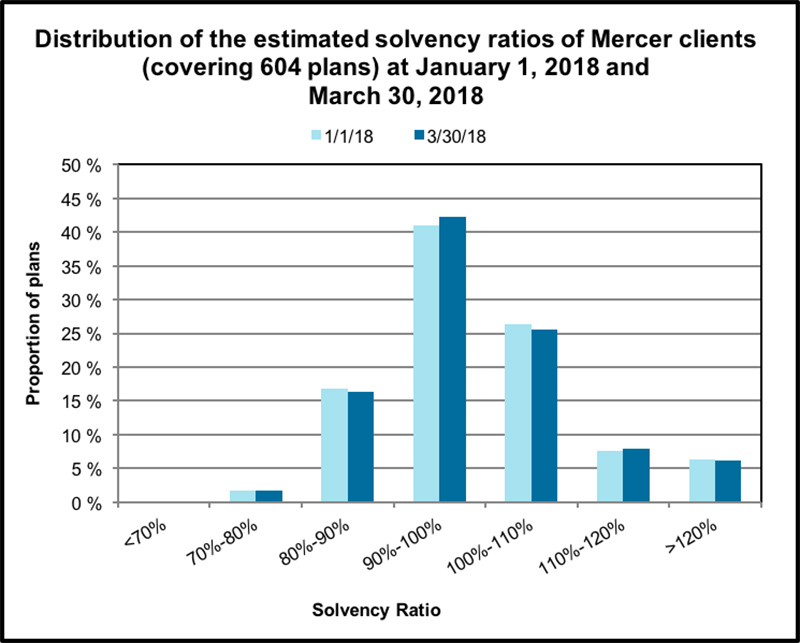 The funded position of pension plans was boosted slightly in the first quarter by a 5 basis point increase in long-term interest rates. Equity markets exhibited volatility but, for most plans, their impact on funded positions was only mildly detracting.

However, volatility returned to the equity markets in the first quarter of 2018, triggered by the prospect of higher short-term interest rates, rising geo-political tensions and, most recently, the mounting prospects of a global trade war.

The recent volatility serves as an important reminder that despite the extended bull market run we have observed in recent periods, equity markets can also move down sharply. Sponsors of closed and frozen defined benefit plans need to urgently consider whether their current risk profile makes sense given their strong financial position and the risks looming on the horizon. “We believe that many of these plans are too exposed to risk, and that their sponsors should consider moving to a lower risk asset mix or entering into an annuity transaction,” continued Monteiro. A significant reduction in risk is likely not affordable for defined benefit plans which remain open – however, these sponsors should consider opportunities to diversify their return sources, particularly through optimizing their equity portfolio and increased allocation to alternative assets. A typical balanced pension portfolio would have declined by 0.5 per cent during the first quarter of 2018. Both the Canadian and foreign equity markets delivered negative returns over the quarter in local currency, while the fixed income market was relatively flat.

Canadian equities struggled over the first quarter, with negative performance across all sectors with the exception of Information Technology (+10.2 per cent) and Real Estate (+0.5 per cent). Despite a relatively strong earnings reporting season for TSX companies, negative market performance over the quarter was driven by uncertainty around recent NAFTA negotiations, in addition to household debt. These concerns are also apparent in the performance of the Canadian dollar, which depreciated versus the U.S. dollar over the quarter, benefiting investors that remained unhedged on foreign investments.

Late last week, U.S. President Trump announced plans to impose tariffs on up to $60 billion of imports from China. “We have observed a heightened level of volatility in the markets over recent periods,” said Sofia Assaf, Principal and Senior Investment Consultant at Mercer Canada. “Investors are showing sensitivity to headwinds of tighter monetary policy, trade protectionism and geopolitical uncertainty and we anticipate volatility to ensue over 2018 as a result.”

The Bank of Canada and the U.S. Federal Reserve both raised rates in the first quarter of 2018 continuing on the contractionary monetary policy path. The Bank of Canada increased its target for the overnight rate to 1.25 per cent in January, while the U.S. Federal Reserve raised its target interest rate in March by a quarter percentage point to between 1.50 per cent and 1.75 per cent. March’s Federal Reserve meeting also marked the first meeting overseen by new Chairman Jerome Powell, following his appointment in February.