DB pension plans would have to increase their current service funding contributions by close to 20 per cent based on lower expectations of future long-term returns on the asset mix underlying the Mercer Pension Health Index in 2019. 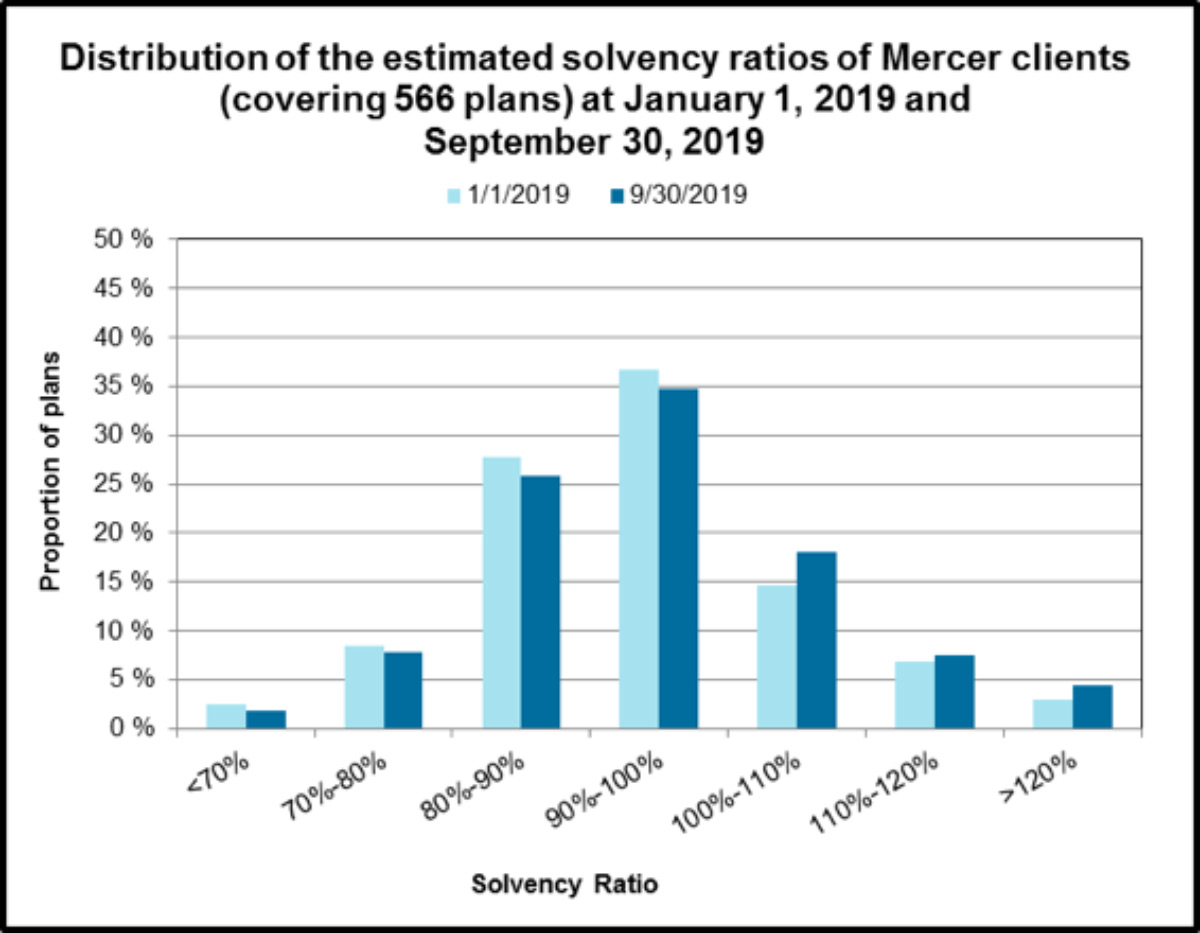 “Most DB pension plans in Canada weathered the storm over the summer and some came out stronger, but there are worrisome signs on the horizon,” said Andrew Whale, Principal in Mercer Canada’s Financial Strategy Group.

While solvency funded positions have largely held up so far, the ultra-low level of interest rates and uncertainty in the equity markets have significantly lowered the expectations for future long-term asset returns in a typical DB pension plan’s portfolio. This perfect storm will likely result in higher cash and financial reporting costs for many plan sponsors in the coming years. In addition to any existing deficit funding, a DB pension plan with a typical asset mix could face an increase in its current service funding contributions by 15 per cent to 20 per cent based on recent decreases in the expected rates of return.

Inverted yield curves in North America may be a strong indicator to a future recession, adding to negative bond yields in other major economies and uncertainties around trade tensions, Brexit, and slowing global growth. “For plans with long time horizons, earning a level of return that will make the plan affordable and sustainable in this environment will require many to think outside the box,” said Whale. “For those plan sponsors with shorter time horizons, now is an opportunity to consider options to further insulate your plans for the chillier days that may lie ahead.”

“The good news is that many plan sponsors have maintained the strong position that they started with in 2019,” continued Whale. “They should use this as an opportunity to embrace new strategies for the road that lies ahead.” 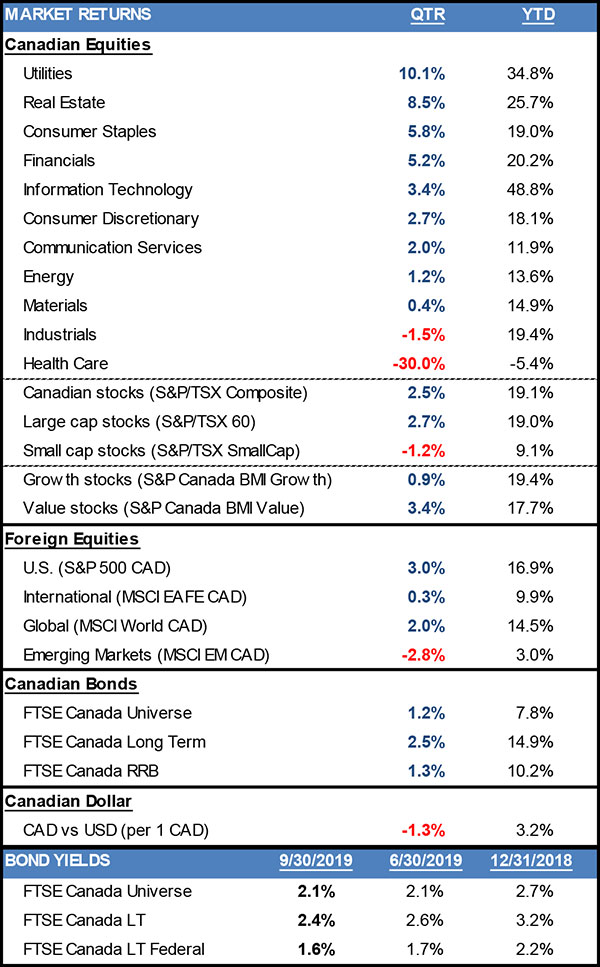 A typical balanced pension portfolio would have risen by 2.1 per cent during the third quarter of 2019. Equity markets advanced with the exception of emerging markets and small caps, while Canadian bonds also rose.

Canadian equity returns were positive in the third quarter. The S&P/TSX Composite Index returned 2.5 per cent. Nine of the eleven sectors posted positive returns with Utilities leading the way, while Health Care dragged.

Canadian fixed income markets rose amidst lower yields for the majority of the quarter, with long-term bonds (2.5 per cent) outperforming universe bonds (1.2 per cent). Real return bonds (1.3 per cent) also rose over the third quarter.

The Bank of Canada held its target for the overnight rate at 1.75 per cent, while the U.S. Federal Reserve cut its target rate by 50 basis points to 2 per cent over the third quarter. 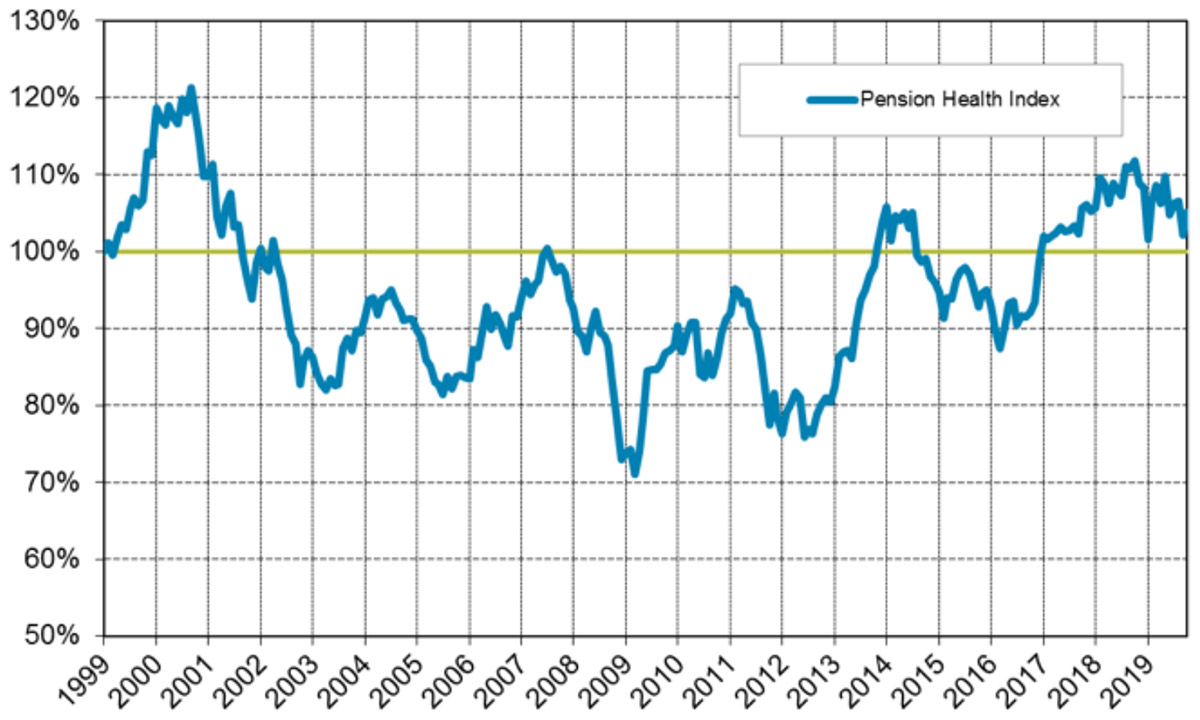 Mercer delivers advice and technology-driven solutions that help organizations meet the health, wealth and career needs of a changing workforce. Mercer’s more than 23,000 employees are based in 44 countries and the firm operates in over 130 countries. Mercer is a wholly owned subsidiary of Marsh & McLennan Companies (NYSE: MMC), the leading global professional services firm in the areas of risk, strategy and people. With 75,000 colleagues and annualized revenue approaching $17 billion through its market-leading companies including Marsh, Guy Carpenter and Oliver Wyman, Marsh & McLennan helps clients navigate an increasingly dynamic and complex environment. For more information, visit www.mercer.ca. Follow Mercer on Twitter @MercerCanada.