The solvency position of Canadian defined benefit pension plans improved in 2017. The Mercer Pension Health Index, which represents the solvency ratio of a hypothetical plan, stood at 106 per cent on December 29th, unchanged from September 30th but up from 102 per cent at the beginning of the year. The median solvency ratio of the pension plans of Mercer clients was 97 per cent at the end of the year, up from 93 per cent a year ago. 2017 turned out to be a positive year, with many defined benefit pension plans being at or very close to fully funded at year end. 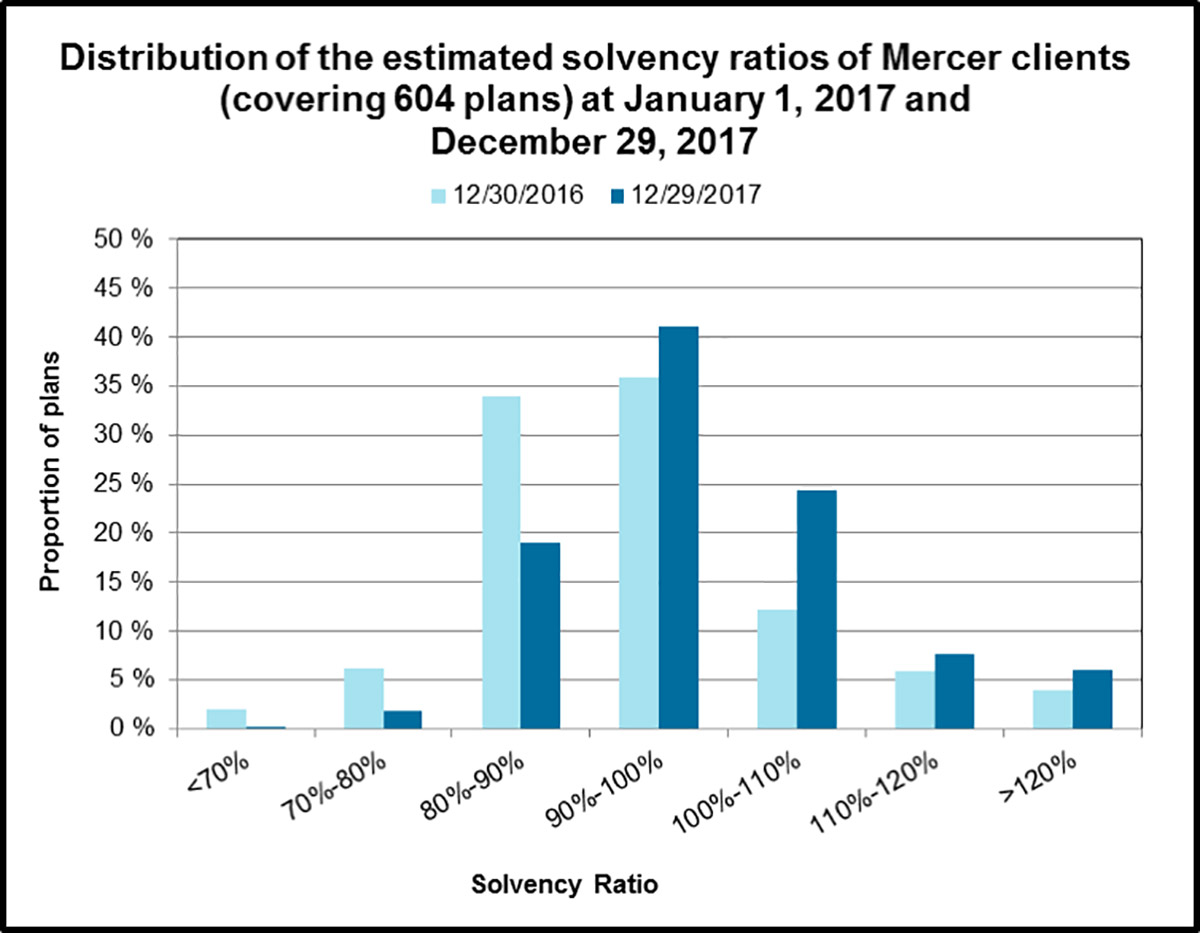 “Canadian DB pension plans are better funded now than they have been for most of the past decade,” said Manuel Monteiro, Leader of Mercer Canada’s Financial Strategy Group.

DB pension plan sponsors in Ontario received further good news with the release of new funding rules in December 2017. The new rules will significantly reduce the volatility of contributions that sponsors need to make to their plans. The new rules will also reduce the level of contributions for most plans, although some plans could face slightly higher contributions. The improved health of pension plans combined with the new funding rules will encourage some Ontario plan sponsors to review their funding strategy, for example by filing new valuations and reducing future contribution requirements going forward. The new Ontario rules follow similar changes implemented in Québec and will likely place further pressure on other Canadian policymakers to adopt similar measures.

While the continued financial health of pension plans is certainly welcome news, plan sponsors should not be lulled into a false sense of security. The ability of equity markets to continue delivering strong future returns following an extended bull run is increasingly being questioned. The long anticipated increase in long-term interest rates remains elusive. Geo-political tensions on multiple fronts raise further market uncertainty.

The new funding rules have fundamentally altered the risk/reward equation for Québec and Ontario pension plan sponsors. We encourage all plan sponsors to review their risk management strategy in light of changes to the funding rules and the strong current financial position of their pension plans. “Many sponsors of closed and frozen plans will likely continue reducing risk with an ultimate goal of eliminating their defined benefit liabilities. However, other pension plan sponsors will view the new rules as an opportunity to continue to take risk in the expectation of reducing the long term cost of their pension plan,” continued Monteiro.

Now that the Canada and Québec Pension Plans have both been enhanced, we also expect plan sponsors to review their design strategy in 2018. A typical balanced pension portfolio would have returned 5.3 per cent during the fourth quarter of 2017. Equity and fixed income markets were positive over both the quarter and year, with particularly strong performance from foreign equities during the year.

Canadian equities delivered positive returns over the fourth quarter, with moderate broad-based sector performance complemented by a strong rebound in Health Care (+46.7 per cent). Energy was the weakest sector over the quarter (+0.7 per cent) and year (-7.0 per cent).

“Although Canadian equities are up over the fourth quarter and overall for the year, we have observed a heightened level of volatility in the domestic equity market over recent periods given the concentrated reliance on cyclical resource based sectors,” said Sofia Assaf, Principal and Senior Investment Consultant at Mercer Canada. ”We see a persistent and growing trend among institutional investors in reducing domestic equity bias and shifting toward a holistic global approach to equity management, in large part due to the implications of the Canadian equity market sector concentration on potential risk/return outcomes.”

U.S. equity returns were strong in both USD (6.6 per cent) and CAD (6.8 per cent) terms over the quarter. The CAD depreciated against the Euro, GBP and USD over the quarter. As a result, international equities, which did well in local currency as the MSCI EAFE returned 3.7 per cent, performed even better for Canadian investors, with a return of 4.5 per cent in CAD. Emerging markets added to an already strong performance in 2017, returning 5.7 per cent in local currency terms and 7.7 per cent on a CAD basis over the fourth quarter.

As expected, the U.S. Federal Reserve raised its target interest rate in December by a quarter percentage point to between 1.25 per cent and 1.50 per cent. Three additional rate increases are expected in 2018 and 2019, unchanged from September forecasts. The Bank of Canada maintained its target for the overnight rate at 1.00 per cent, following two rate increases in the third quarter. 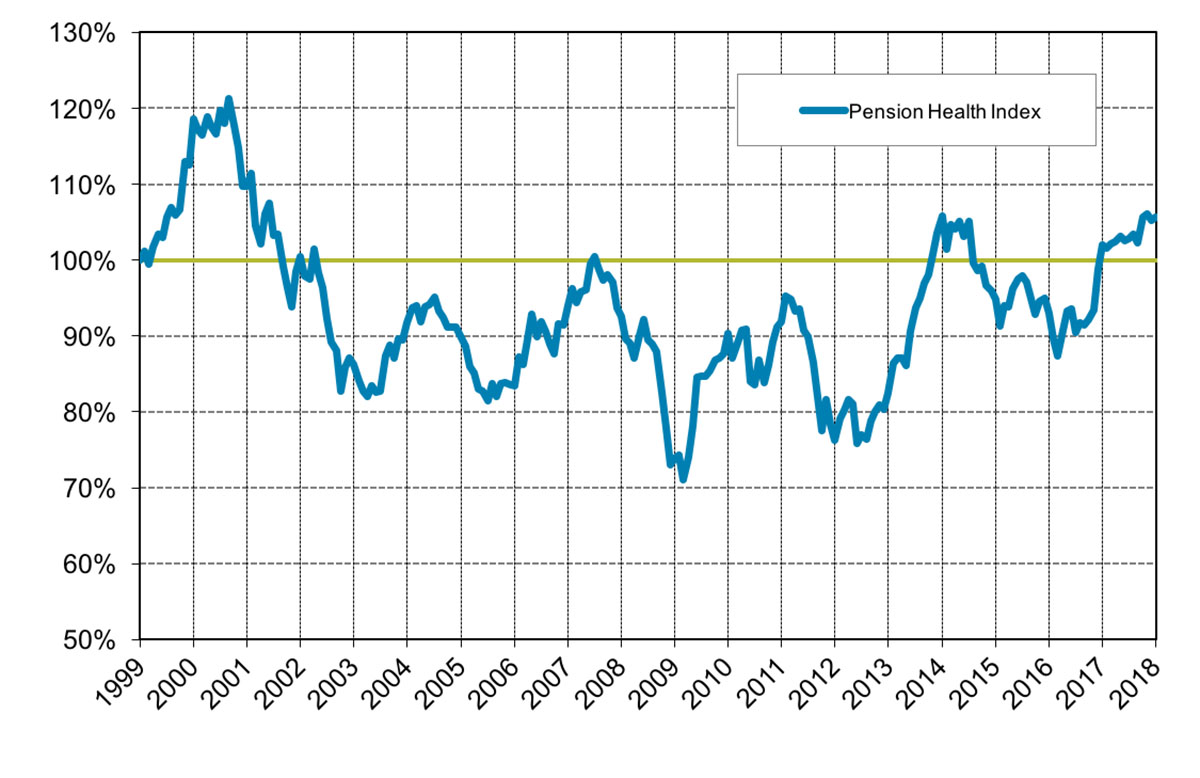 ABOUT MERCER
Mercer delivers advice and technology-driven solutions that help organizations meet the health, wealth and career needs of a changing workforce. Mercer’s more than 22,000 employees are based in 44 countries and the firm operates in over 130 countries. Mercer is a wholly owned subsidiary of Marsh & McLennan Companies (NYSE: MMC), the leading global professional services firm in the areas of risk, strategy and people. With more than 60,000 colleagues and annual revenue over $13 billion, through its market-leading companies including Marsh, Guy Carpenter and Oliver Wyman, Marsh & McLennan helps clients navigate an increasingly dynamic and complex environment. For more information, visit www.mercer.ca. Follow Mercer on Twitter @MercerCanada.