Pension plans were boosted in the third quarter by a 30 basis point increase in long-term interest rates and strong equity markets. However, for many plans this was partially offset by the negative impact of the surging Canadian dollar on unhedged foreign assets. The rise in interest rates will have decreased pension liabilities by 3 to 5 per cent over the quarter. The typical plan hedges about 40 per cent of its interest rate risk through its investment strategy.

“Canadian DB pension plans remain in strong financial shape,” said Manuel Monteiro, Leader of Mercer Canada’s Financial Strategy Group. “However, the strength of the Canadian dollar has resulted in a wide disparity in the funded status of pension plans, depending on their currency hedging strategy.”

While the continued financial health of pension plans is certainly welcome news, plan sponsors remain concerned about looming risks on the horizon. Equity markets have been on a bull run for more than 8 years, and many observers feel that the markets are currently overpriced. Geo-political tensions have increased over the third quarter causing further market uncertainty.

Plan sponsors are eagerly awaiting details of the new Ontario funding rules. The primary impact of the new rules will be a significant reduction in the volatility of cash funding requirements, which will be welcomed by plan sponsors. Policymakers in other jurisdictions will undoubtedly feel some pressure to follow the lead of Québec and Ontario.

Pension plan sponsors should be revisiting their risk management strategy in light of changes to the funding rules, the strong current financial position of their pension plans, as well as increasing concern about whether an equity market correction is due. “Some pension plan sponsors have been reducing risk by tilting their asset allocation away from equities towards bonds and alternative assets. 2017 has also been a busy year in the group annuity market, but still far short of the lofty industry expectations at the beginning of the year,” continued Monteiro. 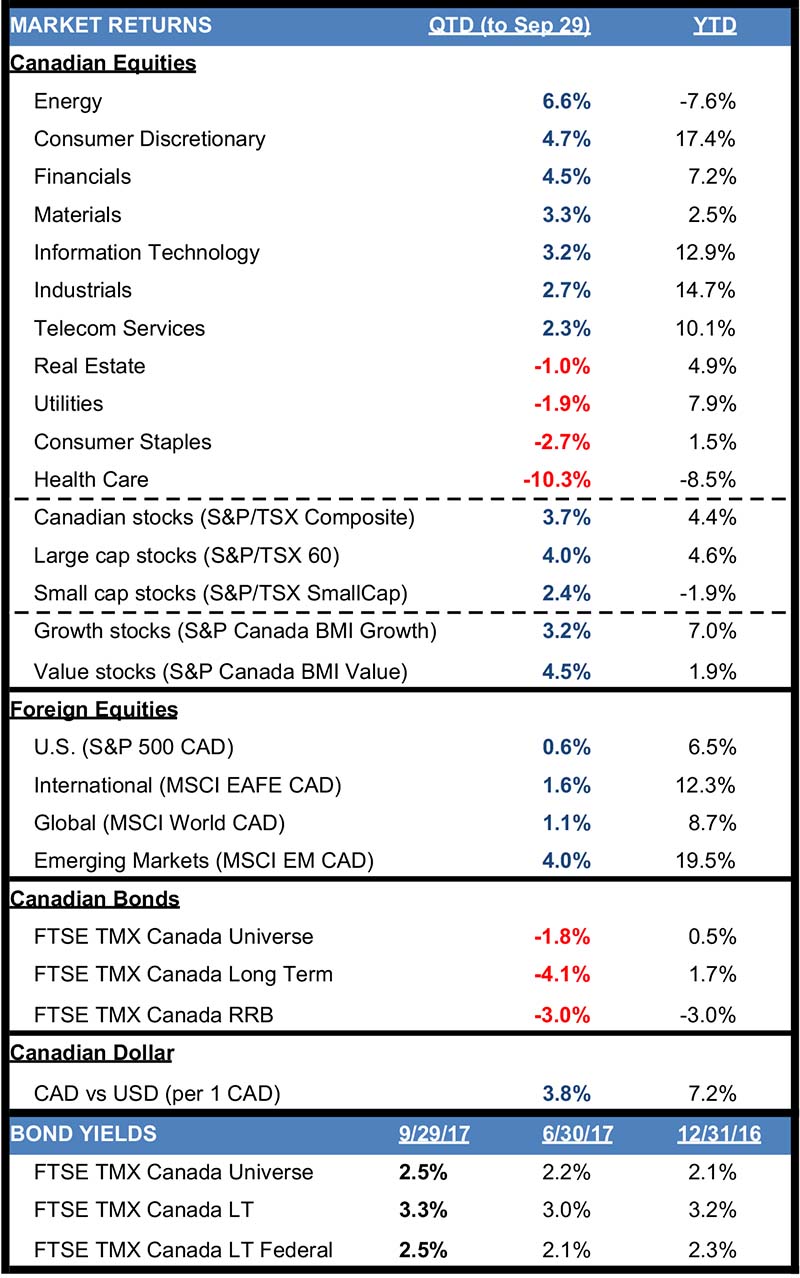 A typical balanced pension portfolio would have returned -0.6 per cent during the third quarter of 2017. Foreign equities had strong performance on a local currency basis but the strengthening Canadian dollar led to weak returns for a Canadian investor on an unhedged basis, with the exception of emerging markets equity.

Broad-market Canadian bonds provided negative returns as yields went up by 0.3 per cent while Canadian equities earned a positive return.

“Canadian equities are up during the third quarter of 2017 led by the Energy sector driven primarily by a rebound in oil prices,” said Sofia Assaf, Principal and Senior Investment Consultant at Mercer Canada. ”Market gains were not broad-based however, as 4 of the 11 sectors generated negative returns over the quarter, which served to dampen the overall market return.”

U.S. equity returns were positive in USD (4.5 per cent) but were nearly flat in CAD (0.6 per cent) terms. The CAD appreciated significantly versus the USD and to a lesser extent against the GBP and the Euro over the quarter. International equities returned 3.4 per cent in local currency but generated a 1.6 per cent return on a CAD basis. Emerging markets continues to outperform developed market equities, returning 7.7 per cent in local currency terms and 4.0 per cent on a CAD basis over the third quarter.

The Bank of Canada increased its overnight rate target twice this quarter to reach 1.00 per cent as recent economic indicators have been stronger than expected with Canada leading the G7 in terms of economic growth. Despite the increase in rates on the short end of the curve, yields on longer maturity bonds remain depressed resulting in Canada having the flattest yield curve among its developed market peers. The long-end of the curve is much more difficult for policymakers to influence and inflation has been low for so long it is difficult for investors to view it as a concern looking ahead. About Mercer
Mercer delivers advice and technology-driven solutions that help organizations meet the health, wealth and career needs of a changing workforce. Mercer’s more than 22,000 employees are based in 43 countries and the firm operates in over 130 countries. Mercer is a wholly owned subsidiary of Marsh & McLennan Companies (NYSE: MMC), the leading global professional services firm in the areas of risk, strategy and people. With more than 60,000 colleagues and annual revenue over $13 billion, through its market-leading companies including Marsh, Guy Carpenter and Oliver Wyman, Marsh & McLennan helps clients navigate an increasingly dynamic and complex environment. For more information, visit www.mercer.ca. Follow Mercer on Twitter @MercerCanada.