Unlike in the first and second quarters of 2022, the financial position of most defined benefit (DB) pension plans decreased in the third quarter. Investment returns were mostly negative in the quarter, and yields on long-term bonds were lower at the end of the quarter than they were at the beginning. Together, these led to a slight decline in the financial position of most DB plans in the third quarter of 2022.

“In spite of the significant market volatility, the financial health of most DB plans would have experienced only a slight decline in the third quarter of 2022,” said Ben Ukonga, Principal and leader of Mercer’s Wealth business in Calgary. “As for what can be expected for the remainder of the year, plan sponsors should continue to expect significant volatility.”

Markets will most likely continue to remain volatile in the short to medium term due to the numerous risks present in the world today. These risks include the war in Ukraine (and the Russian Government’s actions in response to Ukraine’s recent successes on the battlefront, such as the recent annexation of parts of Ukraine in violation of International Law, and the geo-political fallouts from these actions). The upcoming US mid-term elections, the increasing political gridlock and polarization in the US, and the potential for a confrontation between the US and China over the status of Taiwan. The recent volatility in the UK currency and bond markets and the risk of contagion to other markets.

In addition, there are risks presented by a global energy supply shortfall, and the effect such a shortfall would have on the global economy. In particular, plan sponsors should pay attention to the risks associated with energy insecurity in Europe – such as the risk of the Russian Government using Russian gas supplies against Europe in retaliation to sanctions on Russia, and the effects on European economies if their energy supplies are curtailed.

And then there is inflation. Inflation has been running at levels not seen in over 30 years, and central banks globally are on an aggressive monetary tightening mission in order to get inflation under control. Will they succeed without triggering a hard landing global recession? Will higher interest rates make governments, corporations and households unable to meet the interest payments on debts they accumulated during the very long period of low interest rates? This could lead to an increase in bankruptcies and crowding out spending and investments, further exacerbating the risks of a hard landing global recession.

The global health landscape also poses a macro risk. As the western hemisphere is entering the winter months, will a new vaccine-resistant strain of the COVID-19 virus appear? And how will governments and citizens deal with such a resurgence? Will the Chinese government continue with its zero-COVID policy? And how much of a negative impact will this policy, along with what some would call draconian lock down measures, have on the Chinese economy? And how deep will the negative knock-on effects be on China’s trading partners?

Returning to inflation, as workers see a decline in the purchasing power of their wages, there will be increased pressures on employers for higher wages. Sponsors of indexed DB plans will see increases in the cost of these arrangements, and sponsors of non-indexed DB plans may face pressure from their pensioner groups to provide ad hoc cost of living adjustments. Coupled with labour shortages, some employers may have no choice but to increase their labour costs. And companies that are unable to pass these increased costs to their customers will face profit margin pressures and reduced profitability, hurting their future economic outlook.

“What is clear to anyone paying attention is market volatility will persist for some time. It is because of times like these that we cannot stress enough the need for appropriate governance and risk management systems to be in place. They are necessary for the proper management of any pension arrangement,” continued Ukonga.

DB Plan sponsors will need to have a good understanding of how their plans’ assets and liabilities will behave under different economic environments, and especially in a hard landing global recession. In such an environment, will the plan sponsor be able to meet the needs of its pension plan as well as the needs of its operations? Plan sponsors should be taking appropriate actions now to ensure (and improve) the sustainability of their plans, and reduce the risks the plans’ pose to the sponsor.

“In this environment, our advice to plan sponsors is to prepare for the worst but hope for the best,” said Ukonga. 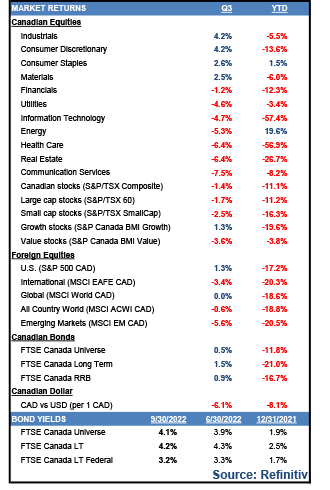 A typical balanced fund portfolio would have posted a return of positive 0.2% over the third quarter of 2022. Global equity markets rallied briefly at the start of the quarter, driven by strong economic activity, declining energy prices and positive sentiment on controlling inflation. However, by the end of the quarter, markets adjusted lower as inflationary pressures in core goods remained sticky and global central banks remained united in enforcing tighter monetary policy for periods longer than expected.

All developed markets ended the quarter with negative returns (in local currency terms) as investors reflected increasing interest rates and recessionary fears into equity valuations. Emerging markets underperformed in comparison to other developed markets. In China, geopolitical tensions, and the continued uncertainty related to re-opening from COVID restrictions after the latest wave of lockdowns, weighed on the performance. In the UK, the last weeks of the quarter were very volatile with fiscal policy announcements having significant impact on equity, bond and currency markets. The US dollar soared against major developed market currencies, supported by hawkish Federal Reserve rhetoric as well as energy importing countries needing US dollars for increasingly expensive energy purchases. Commodity prices moderately declined, except for natural gas, which reached multi-decade high due to increasing demand from Europe, which is building reserves before the winter season. From a style perspective, growth outperformed value due to its significant outperformance in July as investors expected that the Fed would not have to tighten policy as much to control inflation. Interest rate sensitive sectors such as real estate, information technology and healthcare continued to underperform.

Canadian bond prices recovered moderately over the period after a significant decline during the first half of the year. Canada’s inflation controls flattened the yield curve with the universe bond yields rising 23 basis points while long-term bond yields declined by 4 basis points. Long-term bonds outperformed both universe and corporate bonds during the period. The Canadian yield curve inverted for a period over the past quarter, and at the end of September short-term rates were only 3 basis points lower than long term rates and mid term rates were lower relative to both.

“Inflation continues to be the core focus over the quarter, dominating the market narrative with increasing fear of a central bank induced recession” said Venelina Arduini, Principal at Mercer Canada. “We expect inflation to remain above target, but reduced from current levels over the next few quarters. Despite some asset classes starting to look undervalued, the elevated risk and uncertainty over short term economic conditions call for restraint.” 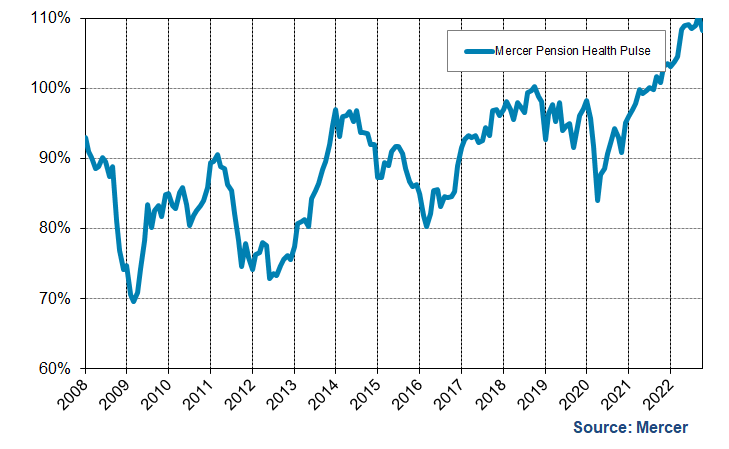 Mercer believes in building brighter futures by redefining the world of work, reshaping retirement and investment outcomes, and unlocking real health and well-being. Mercer’s approximately 25,000 employees are based in 43 countries and the firm operates in 130 countries. Mercer is a business of Marsh McLennan (NYSE: MMC), the world’s leading professional services firm in the areas of risk, strategy and people, with 83,000 colleagues and annual revenue of approximately $20 billion. Through its market-leading businesses including Marsh, Guy Carpenter and Oliver Wyman, Marsh McLennan helps clients navigate an increasingly dynamic and complex environment. For more information, visit mercer.com. Follow Mercer on LinkedIn and Twitter.