Despite the year-to-date asset losses, historically high levels of inflation, fears of a recession and uncertainty all around, the funded position of most defined benefit (DB) plans improved during the second quarter of 2022. The Mercer Pension Health Pulse (MPHP), a measure that tracks the median solvency ratio of the DB pension plans in Mercer’s pension database, increased from 108% as at March 31, 2022, to 109% as at June 30, 2022.

Similar to the first quarter, investment returns were negative for most DB plans in Q2 of 2022, and bond yields continued to increase. Yields, across all different durations, increased between 80 and 100 basis points during the second quarter, and have increased between 160 and 230 basis points since the beginning of the year, a remarkable increase in such a short period. The increasing bond yields reduced plan liabilities, and the reduction in plan liabilities more than offset the reduction in plan assets leading to continued improvements in the financial positions of most plans. 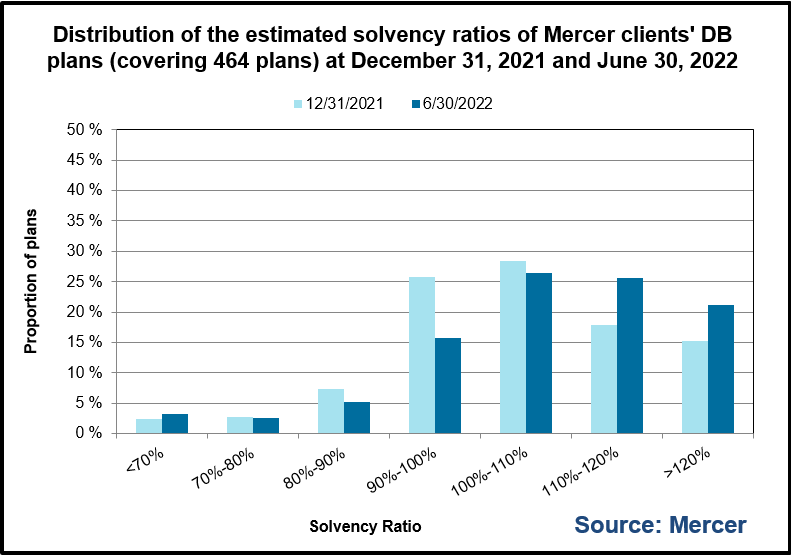 “Despite the significant negative returns on the asset side of the equation, the steep rise in bond yields has had a very favourable impact on the financial position of most DB plans,” said Ben Ukonga, Principal and leader of Mercer’s Wealth Business in Calgary. “However, with the increased risk of a recession, continuing conflict in Ukraine, historic high levels of inflation, and the volatility of the financial markets, DB plans’ funded positions can be expected to remain extremely volatile.”

The global economy is continuing down a path of increased risks and uncertainty, and market participants are becoming increasingly aware of these risks. These risks include inflation at levels not seen since the early 1980s and central banks’ tightening of monetary policy in their attempts to fight inflation. They also include high energy prices, the conflict in Ukraine, the uncertainty on how the conflict will be resolved, and the geo-political realignment of the world after the conflict ends.

Compounding the uncertainty are global food shortages – which are a direct result of the Russian invasion, the political implications of these food shortages in the developing world, and potential spill over effects into the developed world. In addition, there are renewed fears of a recession and uncertainty on how companies’ and households’ behaviours will change either in anticipation of, or in response to, a recession.

With all the above, it is clear that the next several months, and potentially several years, are expected to be volatile for the global economy and DB plans’ funded positions.

“We continue to believe appropriate governance and risk management systems are essential for the proper management of any DB plan. And plan sponsors and administrators need to frequently review and stress test these systems to ensure they will hold up if extreme market events occur,” said Ukonga.

Plan sponsors will also need to understand how high inflation will affect the plan(s) they sponsor and their workforces. From the erosion of purchasing power for non-indexed DB pensions to the increase in the cost of indexed DB pensions. From higher salary demands from employees, which increase the ultimate costs of final average DB plans, to demands for benefit rate increases from members of flat benefit rate DB plans.

Members of defined contribution (DC) plans are very likely to have experienced negative rates of return year-to-date which would have reduced their account values, and when coupled with higher inflation, the decline in purchasing power will come into focus. Employers and plan sponsors must ask themselves: will all the above influence employees’ decisions on when to retire? And will this be an undesirable effect, affecting workforce management plans already in place, or a welcomed side effect to ease talent shortages?

“What is clear is inflation poses a multi-faceted set of issues for plan sponsors to deal with, and a multi-faceted approach will be required to solve them,” said Ukonga.

A typical balanced pension portfolio would have posted a return of negative 12.1% over the second quarter of 2022. Global equity markets continued their decline throughout the quarter, entering bear market territory in June. Wage growth, supply chain issues and ongoing geopolitical conflicts in Ukraine fueled high inflation. This resulted in a stronger monetary tightening response from global central banks during the quarter.

Developed non-domestic markets ended the quarter with negative returns as investors rotated away from risky assets amid increasing interest rates, a higher yield environment and slowing economic growth. The U.S. equity market underperformed overseas peers due to its growth heavy composition. The Emerging and Asia Pacific markets outperformed, as the re-opening of China from COVID restrictions resulted in an economic boost. Energy outperformed during the quarter, building on its previous gains with global supply still restricted from Russia and Ukraine. From a style perspective, value continued to outperform growth, supported by the energy and consumer staples despite recession fears affecting financials and industrials. Inflation and interest sensitive sectors such as real estate, information technology and healthcare continued to perform poorly.

Despite outperforming some global peers during the quarter and benefiting from higher energy prices, Canada still posted a negative return as stronger than expected monetary tightening impacted other sectors of the economy. The health care and information technology sectors saw heavy declines, with even inflation-hedged assets such as real estate seeing outflows. The Canadian dollar depreciated against the U.S. dollar given the equalizing monetary policy increases.

Canadian bond prices continued to decline as both universe and long term bond yields increased dramatically by approximately 90 basis points since the start of the quarter. Corporate bonds outperformed their universe counterparts over the quarter.

“The possibility of a recession arising from the global central banks’ efforts to battle inflation has dominated the narrative over the quarter.” said Venelina Arduini, Principal at Mercer Canada. “We believe that markets will likely remain volatile for the foreseeable future. In this environment, we advise against second guessing momentum and repositioning portfolios as events unfold. Investors with high liquidity needs should maintain sufficient buffers in portfolios and manage asset transitions carefully.” 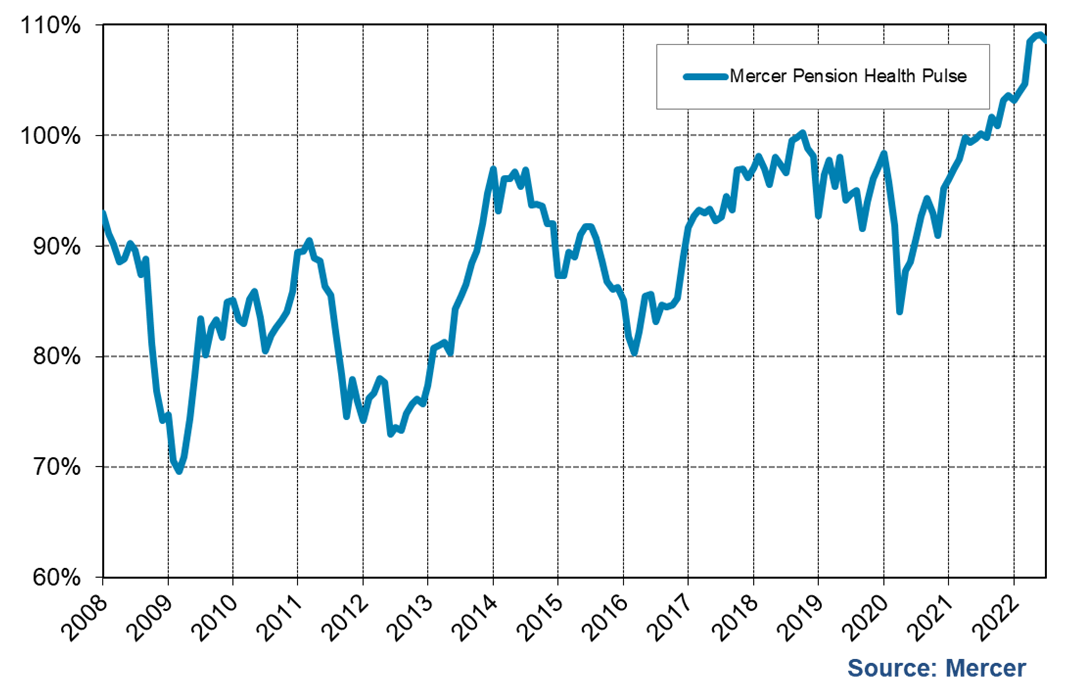 
Mercer believes in building brighter futures by redefining the world of work, reshaping retirement and investment outcomes, and unlocking real health and well-being. Mercer’s approximately 25,000 employees are based in 43 countries and the firm operates in 130 countries. Mercer is a business of Marsh McLennan (NYSE: MMC), the world’s leading professional services firm in the areas of risk, strategy and people, with 83,000 colleagues and annual revenue of approximately $20 billion. Through its market-leading businesses including Marsh, Guy Carpenter and Oliver Wyman, Marsh McLennan helps clients navigate an increasingly dynamic and complex environment. For more information, visit mercer.com. Follow Mercer on LinkedIn and Twitter.